Hello, good day and welcome to my humble abode. Well, I say humble abode. It's a just a blog. And likely not even one I'm going to use that much. If it was my actual abode, it would probably be an absolute tip. Books, dvds, empty bottles strewn everywhere and a funny smell I can't quite find the source of but continues to drive me mad no matter how much air freshener I spray everywhere and-

*clears throat* Anyway, my poor living habits aside, this blog is basically a dumping ground for whatever takes my fancy. Films, anime/manga, Tv Shows, books, I'll review them all. Or I may doll out some (debatably) useful writing advice or musings. Or I may just go on a massive rant on whatever insignificant thing has gotten me into a mood. The point is, expect anything. Except quality. Or good taste. Or a consistent release schedule.

So, as an elegant solution, I decided I would review a series barely anybody knows, but I really love. And that series is... Kingdom

Warning: There are some pretty NSFW images below. If you're particularly squeamish about gore, blood and people with pointy teeth, you may not want to read on. Kingdom is a Weekly Manga series by Yasuhisa Hara. It debuted in 2006 and, to date, over 400 chapters have been released. I ploughed through them all in less than a week. Oh yes. It is a fictionalised account of the latter end of the Warring States period (475 - 221 BC) in Chinese History. The series follows a young orphan boy, Xin. Xin and his childhood friend, Piao, dream of growing up, making their way through the army and eventually becoming Generals. One day, Piao is taken to the Royal Palace by a minister, leaving Xin alone. A few months later, one fateful night, Piao returns mortally wounded (because he's a childhood best friend. Of course he's going to die) and instructs Xin to go to a hidden shack in a near town. Xin arrives to find a boy inside who is almost identical to Piao. The boy, Ying Zheng is the current king of China and is in hiding after a coup lead by his younger brother (which caused Piao (Ying's body double) to be killed). Ying asks Xin to help him regain his throne. And, after that, to aid him in his ultimate goal. The unification of China. Okay, I know what you're thinking. That all sounds rather basic, right? The deposed royal asks the aid of a regular person (who turns out to have more skill/power than meets the eye) to help him regain his kingdom. Seen it plenty of times before. And you'd be right. But that storyline only lasts the first arc. The second is where things really start getting good. Because that's where we replace small personal battles with full on warfare and the series moves from an enjoyable if basic action series to an intense, interesting ride with a large cast of colourful and memorable characters. 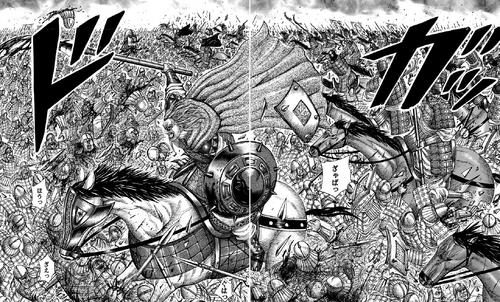 And, to be honest, if I had to pick the defining characteristic of Kingdom, it would be the large scale battles. These aren't the typical 'throw troops at each other until one side dies' battles you usually see in Hollywood movies. These are actual tactical showdowns with two sides trying to outsmart and outmanoeuvre each other with genuinely realistic and fascinating tactics. (At least, I assume they're realistic. I haven't really looked them up, but I'd be really surprised if they weren't accurate to the time period). It's the sort of series where I felt I really learnt a lot in addition to having a great time. In particular, the back and forth between the two sides is absolutely incredible. Aside from a few select cases, I genuinely couldn't tell you who was going to win each encounter until the very last chip had been played. And, we get perfect balance of tactics (with the Generals overseeing the action) and action, as Xin and his friends attempt to fight through the heaving bulk of armies and soldiers to achieve whatever their objective is. The pacing is top notch and leaves you nearly constantly wanting to know what happens next. And the battles feels sufficiently epic and large in scale as they should. Also, the art is absolutely fantastic. Admittedly, I do make fun of some of the more gonkish character designs, like the picture above, but they do really help you tell the characters apart and make them recognisable. But the really good art comes in the battle scenes. Thousands and thousands of troops all heaving and fighting against each other. Dismemberments, decapitations, blood everywhere, it looks fantastic. 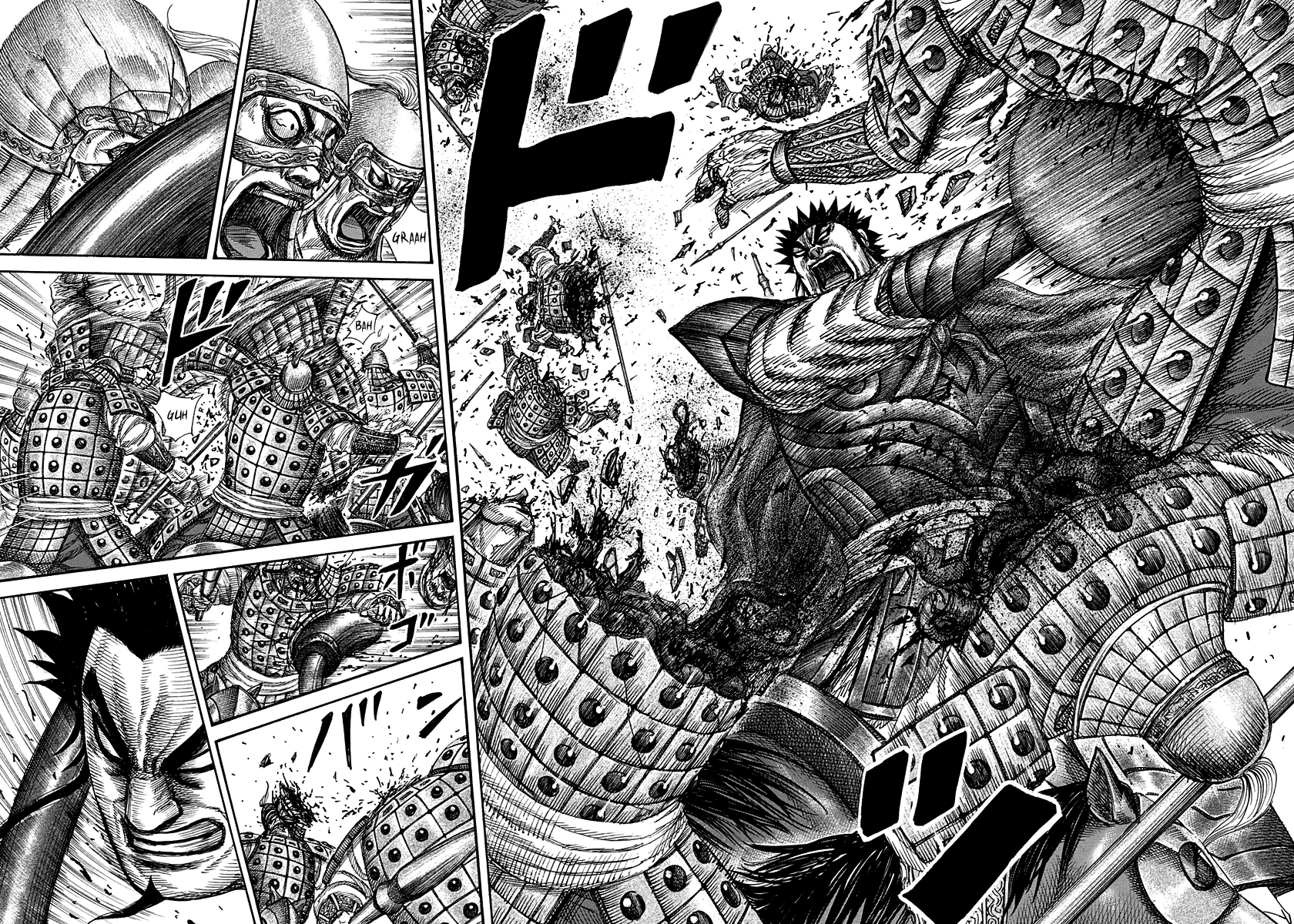 Although, it still looks somewhat tame compared to the crowds at Black Friday.

One thing I do have to say though is that this is very much a Shonen manga and holds many of the tropes you'd often find in that sort of series. So you've often got people acting as near one-man armies (although they keep it somewhat in moderation), our main character shrugging off near fatal wounds and forcing himself back to his feet through sheer willpower. The sort of stuff, you'd often see in Shonen manga yet may seem bizarre to unfamiliar viewers. Also, it does kind of knock against the whole realistic warfare thing the series has going when you have Generals riding into battle plowing aside anyone in their way (although that sort of behaviour tends to be restricted to a select few and they are more than good enough to justify it). Also, it's not particularly the sort of series that will often sit down and talk about how dark or depressing war is like, say, Fury. Sure, sometimes it delves into the darker sides of war to good effect, but it generally tends to almost glorify it, something that I'm of a mixed mind about. But, in the end, this is a manga designed to entertain rather than lecture. And my god it does a fantastic job of that. I haven't even scratched the surface of why I like this series so much. Mostly because I don't want to spoil a lot of the twists and turns going into the series. This is very much something you want to go into blind. Heck, even knowing who's going to win/lose a certain battle takes a bit of the edge off and reduces the tension. So I've tried to avoid even the slightest spoilers.

To sum up, this is a fantastic series, even for those who may not be the biggest fans of battle manga. It's intense, informative, amazingly well drawn and has a fully realised world and large cast of memorable characters. Admittedly, being over 400 chapters and still going strong means it's one hell of a long read, but I think it's more than worth it.